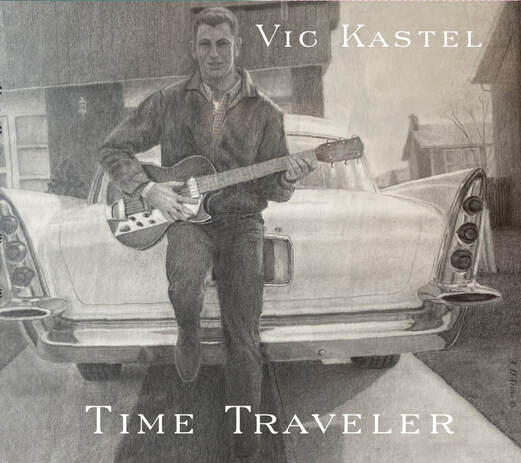 Good Times continued, "No newcomer to the business … Kastel performed in the 1960’s with The Axents at The Peppermint Lounge, home of The Twist sensational. He’s also opened for the likes of Jackie Wilson, Wilson Pickett, Aretha Franklin, The Drifters, and the James Cotton Blues Band.”

SKOPE magazine called out the track “Never Gonna Leave It” saying it featured Farfisa organ: “That’s one of those distinctly era-related instruments. Would you call yourself a kind of rock & roll purist, with tastes that pre-date the modern era?”

Kastel responded in the affirmative.  “As I developed my career, I was introduced to all of the available tools of rock & roll … and, the Farfisa was the one of them I always loved.”

He also wrote and performed with Blues-legend  Little Buster and inducted him at the Long Island Rock ‘n Roll Music Hall of Fame.

Recorded at the legendary A&R Studios in New York City (owned by producer Phil Ramone) it was recorded live and on tape – just as Bruce Springsteen’s new album has been.

Adds Kastel, “These songs represent some of my work preserved in their original form.” Included are “Don’t Ever Let Me Catch You Giving Up On My Love,” “First Impressions,” “In A Lonely Room,” and “Like Abraham’s Son.”

ONE MONTH ON, VIC KASTEL’S TIME TRAVELER ALBUM HAS IGNITED THE MUSIC MEDIA​

Recorded in the late-70’s  -on analog equipment- at producer Phil Ramone’s legendary A&R Studios in New York City – Kastel’s debut effort has created interest in not only the songs, but the album’s unique production.
SKOPE ‘s Dan McIntosh highlighted the use of a Farfisa organ on the track “Never Gonna Leave It” - asking Kastel if he was a rock’ n roll purist: Asked McIntosh, “That’s one of those distinctly era-related instruments. Would you call yourself a kind of rock & roll purist, with tastes that pre-date the modern era?”

Kastel answered: “Definitely. As an innovation, auto-tune has its place, however I preferred to achieve intonation naturally. The album is a full-blown homage to those times. The band was all in the studio at the same time … playing together. There’s a certain magic generated by that process. I used Pro Tools too to sweeten some of the tracks, but back then, all live!”

The initial single from the album, “Don’t Ever Let Me Catch You Giving Up On My Love,” despite its lengthy title, has garnered the best and quickest response.

Says Kastel, “That song has held up – and, even gotten to sound better through the years. It’s a straight pop-rock single for certain.”

On the album’s packaging there’s an archival photo of Kastel playing with his first band, the Axents at the famous Peppermint Lounge.

Asked McIntosh, “There’s a picture of your old band, The Axents, performing at the famous Peppermint Lounge, which has been called the launchpad for the Twist dance phenomenon in the 1960’s. Were you doing a little twisting there during that time? It’s also said to be where go-go dancing started. Did the Axents ever perform flanked by mini skirt wearing go-go dancers? A lot of famous people frequented that club back then, including many movie stars. Did you have any memorable celebrity encounters?”

Adds Kastel: “Yes, that was me doing a bit of twisting. We actually performed either the day before, or the day after The Beatles visited that club. It was such a pivotal spot at that time. Electric for sure and yes, go-go dancers everywhere.”

The other track that has gained the most traction is the doo-wop oriented “First Impressions.”  Adds Kastel, “Dion has, and always will be an inspiration for me. Frankie Lymon and The Platters too were inspirations. Very stylized and to me, a much-missed genre for sure.”

As to the album’s delayed-release, Kastel says: “I’ve literally been working non-stop; raising a family and building this career. I’ve been very fortunate in being involved in so many significant musical projects that when we recorded these tracks, my intention was always to get them released, but this project, or that project came up. I had intended to finally get them out last year, but then I got involved in a production of Joseph and the Amazing Technicolor Dreamcoat - performing in the band.”

Kastel’s plan were to front an East Coast tour, but with the pandemic, that has now been postponed.

Imagine recording 11 original songs in the 70’s – with analog equipment and musicians – and releasing it today?

Says Kastel, “I’ve lived with this material for a while and what I was able to create then, has come back into style today in a big way, so I’ve decided to release the album. No auto-tune, no machines … it’s all pure- music. Back then, we actually recorded in the big room at the studios; these days most records start at home.”

Recorded at the legendary A&R Studios (owned by Phil Ramone), it is revolutionary in its originality and the manner in which it was recorded.

Early listeners have marveled at not only his songs (especially the lead off track “Don’t Ever Let Me Catch You Giving Up On My Love” and the emotive “First Impressions”), but the recording process.

A founder and member of the Long Island based quartet The Axents, Kastel has performed with a variety of acts, including The Drifters, Little Anthony and the Imperials, Gary U.S. Bonds, Jay and the Americans, Sam the Sham and the Pharaohs, The Angels; Randy & the Rainbows; and, Patti LaBelle and worked with the original producers of rap-icon Kurtis Blow.

Most recently he performed in a production of Tim Rice and Andrew Lloyd Webber’s Joseph and the Amazing Technicolor Dreamcoat.

A journeyman musician and artist of the first order, Kastel is based in Long Island, New York (itself introducing a plethora of talent, from Joan Jett, to Debbie Gibson, Billy Joel and Lou Reed) and has performed at clubs in and around the Island, including a show at the legendary My Father’s Place.

Times Square Chronicles said of the album, "Time Traveler is a welcome, rare surprise this year. It sounds both fresh, new and... vital. When both Bob Dylan and Neil Young are still putting out new albums, Kastel's debut is on the mark."

It will be available on July 31.